This one isn’t so much a myth as it is an incomplete statement. Not surprising, as yawning is one of the least understood behaviors observed in humans. This is a better way to put things: “Yawning may be a sign of sleepiness, although this is not always the case.” Humans yawn a lot, and in many different locations and situations. Why is that?

First: What is a Yawn?

It may seem silly to have to define this, but here at Good Night’s Rest, we like to be thorough when answering questions and debunking myths! It never hurts to have all the information laid out. 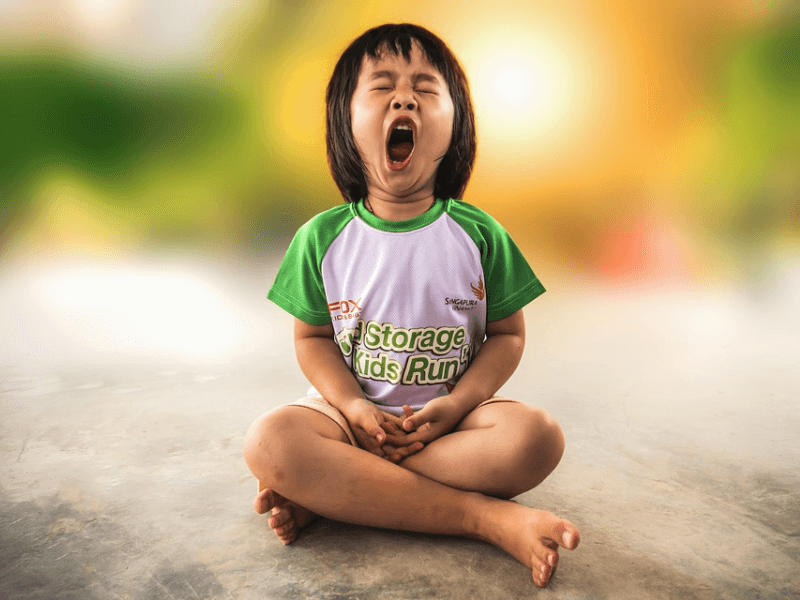 First of all, many animals yawn—not just humans. However, for the purposes of this article, we’re understandably going to focus on human yawning. Scientifically speaking, yawning is a reflex action that is characterized by a sudden intake of air into the body through the open mouth. This is accompanied by at least the stretching of facial, jaw and neck muscles; and often more, like angling the head upward or arching the back. Yawning involves interactions between the brain and the body, though the brain does not have to be conscious for it to occur.

When Do Humans Learn How to Yawn?

We don’t really learn how to do it. Like breathing or blinking, it’s just something that the body instinctively knows how to do. Humans yawn even before they start to talk or walk! There’s even evidence the human fetuses yawn in the womb—sometimes as early as the first trimester of pregnancy. Similar to sneezing or hiccuping, yawning is not something we consciously decide to do; often it just happens. We yawn when we’re awake, when we’re asleep, when we’re tired, when we’re alert, when it’s okay to do it, and when it’s embarrassing to be caught doing so. Yes, we can stifle a yawn, but when we do, we’re typically left feeling unsatisfied.

Why Do Humans Yawn?

Yes, yawning is something every human does, but why do we do it? We may think that we know the reasons behind our yawns; boredom, sleepiness and tiredness are often thought of as causes. However, what about instances of yawning during situations that are very different? For example: Yawning has been observed in people who are hungry, stressed, or about to start on a difficult task.

It seems that more than just a sign of low energy or fatigue, yawning may signal a simple change within the body—whether it’s a change in alert levels, amount of focus needed, or something other alteration made to a physiological state. Below we’ll take a closer look at why people yawn from two perspectives: outside triggers and possible underlying bodily conditions.

It’s Contagious and Prone to Imitation

Yes, this one is true and not a myth: Yawning is contagious. There’s just something about it that inspires an involuntary imitation. You may not have noticed it before, but pay attention the next time you yawn in a public place; chances are, someone else will follow suit. When humans see someone else yawning—even if it’s not in person, and just in a video or a photo—there is often the urge to yawn. Sometimes even the suggestion of a yawn works! To illustrate: While researching for this article, we found ourselves yawning frequently despite being very alert and interested in the topic.

There are many theories as to why yawning is contagious and so prone to imitation. Here are two of our favorites, boiled down to their specific cores: empathy and evolution.  When it comes to empathy, the idea is that humans—and other animals that have been observed displaying compassion, such as chimpanzees and dogs—mimic yawns as an effect of a deeper social connection. Studies have shown that family members and friends are more likely to catch yawns from each other than strangers; this supports the empathy theory. When it comes to evolution, the idea is that yawning is a vestigial social mechanism; still practiced, but with its real significance lost to time. Some postulate that it may have originally functioned as a nonverbal signal to relax or ask for help, or a means to synchronize further actions of a group after an observed change in environment or situation.

You may have heard an explanation for yawning that relates to it being a way for the body to compensate for a lack of oxygen—which may be brought on by tiredness or sleepiness—but studies have not fully supported this. Instead, there is evidence of something that is somewhat on a similar tangent; that is, that yawning may help keep your brain at an ideal temperature. There has even been a study that shows that people are less likely to yawn when given ice packs for their foreheads, and more likely to yawn when exposed to heat.

How does yawning keep the brain cool? When you yawn, you flex the walls of your sinus cavity. This, along with inhalation, is what ostensibly helps prevent your brain from getting uncomfortably hot.

Here’s where we tackle the idea that started this entire article. While yawning isn’t directly related to a lack of sleep, it does seem to happen whenever the body is feeling sleepy.

Boredom, tiredness, sleepiness and even hunger—all of these are effects of a lack of stimulation or energy. These states can have us unable to focus or pay attention to what we’re doing. In this sense, being bored or hungry is the same as being sleepy. How does the body respond to this situation? By yawning, of course. If there is no other stimulant—no bright lights to look at, no loud music—a yawn is a surefire way to raise alertness and perk up. This gives the body just the boost it needs to re-engage in a monotonous activity, or get to a place where it can rest or eat.

It’s Preparation for Change or Movement

Similar to the boost yawning gives to the body when it’s lacking in energy or stimulation is its use as a way to transition from one physiological or behavioral state to another. Remember when we pointed out earlier that yawning is sometimes observed in people who are stresses or about to undertake a difficult task? This is the reasoning behind it. To give a simpler and more easily understood example: When we yawn after waking up from a good night’s rest, the action is likely not indicative of remaining sleepiness, but rather a way for the body to gear up for the day ahead. It’s like doing light stretching before running.

What About Chronic or Unusually Frequent Bouts of Yawning?

Is there such a thing as yawning too much? In rare cases, frequent yawning can be a symptom of an underlying condition, which may come in the form of Parkinson’s disease, heart trouble, multiple sclerosis, problems with body temperature regulation, or sleeping disorders.

However, these are not common reasons for yawning by any means. Usually this really just means that your body is telling your that it’s time for a nap—or if that’s not possible, something stimulating like a walk or a cup of coffee.

Back to: Sleep Myths Debunked