Sleepwalking—also called somnambulism—is an easily recognized but often misunderstood disorder. Though it occurs more often that most people may think it does, the proper way to deal with it is plagued with myths and urban legends. This is, in part, due to the varied ways it has been portrayed in popular media through the ages; from the dark and guilt-ridden final appearance of the titular character in Shakespeare’s Macbeth, to the hilarious and over the top depictions of sleepwalking by actors Will Ferrell and John C. Reilly in the 2008 film Step Brothers.

The myth that we’re debunking is actually a catchall phrase. Several reasons are given for never waking a sleepwalker. Some say that the act will outright kill the sleepwalking person; while others warn of possible brain damage, extreme shock, the onset of a heart attack, or other similarly harmful results. Yes, it can be dangerous to wake up a sleepwalker, but the real rationale is quite different from the myth. There is a kernel of truth here somewhere, but let us be clear: The chances of a worst case scenario—any or all of the enumerated dangers coming to pass—is probably about as likely as someone dying unexpectedly from a nightmare.

To fully understand the debunking of the myth, it’s important to start with the basics. Somnambulism is a sleep disorder that is part of a category of sleep-related illnesses called parasomnias. We’ll focus on pure sleepwalking; although worth noting here that a parasomnia called sexsomnia—wherein a person is able to engage in sexual intercourse while remaining completely asleep—is sometimes lumped in with somnambulism as a whole.

When Does It Happen?

Obviously, it happens when a person is asleep! Contrary to what most may assume, though, sleepwalking is not as likely to happen during REM sleep. This means that while it’s not unheard of, it’s not common to dream and sleepwalk at the same time. Somnambulism episodes typically occur during the deepest stage of sleep, when the brain is at its quietest; although worth noting that this is also when the body tosses and turns the most.

Young children make up the majority of those afflicted with somnambulism, although most usually outgrow the disorder along with the onset of puberty. Adults can also suffer from sleepwalking episodes, though it’s much rarer.

Many factors may increase the chances of someone developing somnambulism. There’s genetic predisposition, of course; if it runs in the family, there is a huge chance that a person will be a sleepwalker. The risk runs higher with bad habits and bad sleep hygiene: unchecked stress, excessive alcohol consumption, a lack of sleep, an inconsistent sleep-wake cycle. People with other existing medical conditions or sleep disorders—from asthma and panic attacks, to sleep apnea or restless legs syndrome—are also more prone to somnambulism. It can also arise as a side effect of medications—particularly sleep aids—that increase time spent in deep NREM sleep.

A side note: Sleepwalking can be a sign or symptom of a developing seizure disorder, as well as Alzheimer’s and Parkinson’s. If you or someone you know has recently started sleepwalking, it may be a good idea to consult a healthcare professional and get a proper diagnosis.

For most sleepwalkers, all that happens is that they sit up or get out bed and perform mundane and routine actions: dressing and undressing, going up and down stairs, and the like. Some, however, are able to perform complex actions while asleep: preparing a meal, leaving the house entirely, and even driving a car! They’re not always slow and weak, either; sometimes sleepwalkers can run fast and display amounts of strength they’re not able to duplicate when awake. Sleepwalking episodes can last anywhere from a few seconds to over 30 minutes.

Sleepwalking in real life is different from how it’s portrayed in fiction! Somnambulists do not look like zombies; outstretched arms and groaning noises aren’t common at all, although eyes are typically open and glazed over or glassy. People that sleepwalk navigate from memory, and not by sight; so while they may move around confidently they are not really aware of what they’re doing or where they’re going. It’s not easy at all to catch their attention. If spoken to, they may respond—but don’t expect them make sense or remember what they’re said once they’re awake. 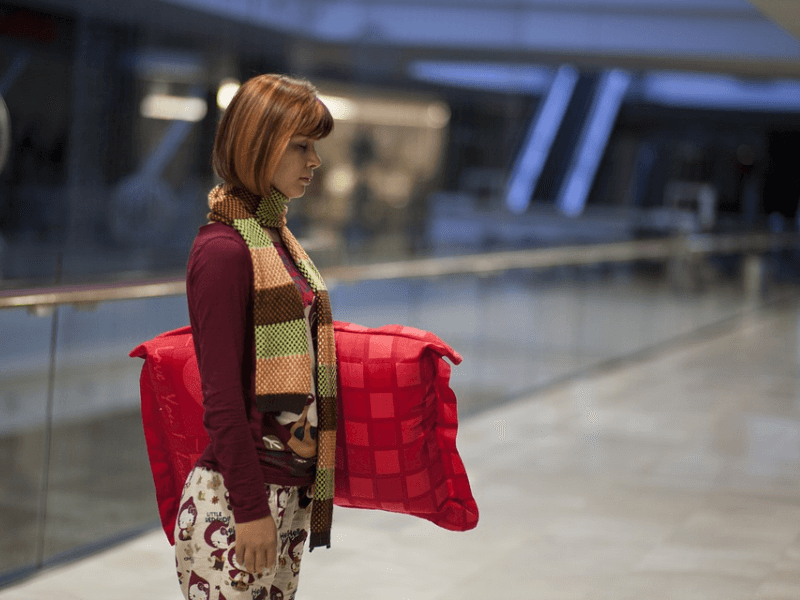 What Happens When You Wake a Sleepwalker?

We mentioned earlier that it can be dangerous to wake a sleepwalker, but not for the reasons given in myths and cautionary tales. The danger actually comes from the fact that when you do wake someone who’s been sleepwalking, you’re rousing them from the deepest stages of sleep; not only will they be hard to wake, but they will also likely be very groggy and cognitively impaired once the deed is done. This means that a sleepwalker won’t wake up with a clear mind; and may be disoriented, terrified, and even violent. The likelihood that they will suffer from lasting harm is low; the chances of them harming you are probably higher.

Imagine waking up in a place that’s different from where you want to sleep—not in your bed, not in your bedroom, maybe not even in your house! The confusion brought about by this is what causes sleepwalkers to lash out, sometimes acting in a very erratic and surprising manner; possibly hurting themselves or the people waking them. They may not even recognize you immediately upon waking up; which can only add to their panic. This common sleepwalkers’ reaction—which can look like a seizure or a worrying amount of shock—is probably the origin of the myth we’re debunking.

Because of what usually happens when a sleepwalker is woken up, it’s not always a good idea to do so; especially if what they’re doing while asleep isn’t likely to endanger their or anyone else’s lives.

What Is the Best Way to Deal with a Sleepwalker?

Assess the situation quickly. Is it possible to deal with the sleepwalker and get them to a place of safety without having to wake them up? This should always be the first choice, because it benefits both parties concerned. The sleepwalker doesn’t get forcefully woken up, and you don’t run the risk of possibly being hurt inadvertently. The best way to do this is to just calmly lead the sleeping person back to their bed, using a soothing voice. You can also gently nudge or take the person’s arm and assist them, though you should be careful and make contact only as needed. Often, it’s enough to just walk near them and make slight course corrections as necessary.

On the other hand, if you feel that it’s imperative to wake up the sleepwalker, try to do so from a distance; with loud, sharp and repeating noises. This is a good idea if the sleepwalker is holding something that may be used as a weapon, for instance; or if they are about to come into contact with something dangerous—like a swimming pool or an open fire—and you’re still too far away to guide them elsewhere. When they start to wake up, be ready to assist them; and do explain that they’ve been sleepwalking. The reassurance and the information will go a long way towards making them feel better.